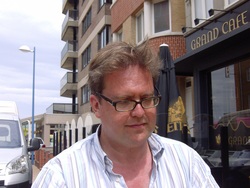 Born in Berlin and raised bilingually in New York City, I graduated from the Bronx High School of Science in 1981, earned a B.A. in German and Philosophy from Wake Forest University in 1985 and then attended Cornell University where in 1992  I received my Ph.D. In German Studies. For nine years I taught in a non-tenure track line at Columbia University, first as an assistant professor, then as an associate professor.  In 2000 I moved to the Penn State University, where I now serve as Professor of German and Department Head.

My scholarly research combines contemporary theory about material culture (fashion, consumer goods, architecture) with canonical philosophy in order to demonstrate the historical interplay between systematic thought and the everyday life.  My teaching and writing considers German culture in a global context.

My current book, Chinese Sympathies from Marco Polo to Goethe: Media, Missionaries, World Literature examines the early modern European interest in Chinese culture. The book offers a genealogy of world literature and cosmopolitanism as it relates to East Asia by tracing how readers in Germany and the rest of Europe grew to identify with the Chinese, first through missionary reports about converts, then through rationalist ethical thinking, and then finally through reading Chinese literature. The book ends with three chapters on Goethe's engagement with Chinese philosophy, poetry, and novels as the basis for his asserting the emergence of world literature. ​Chinese Sympathies is currently in production at Cornell University Press and will appear in 2021.

My first book, The Tyranny of Elegance: Consumer Cosmopolitanism in the Era of Goethe (Johns Hopkins UP, 1998), discusses the emergence of a bourgeois consumer culture in eighteenth century Germany, connected to Liberal economic thought and media innovations.  The argument moves from fashion journals to famous novels to ordinary objects of use.  I integrate economic developments with gender transformations.  My analysis of eighteenth century German masculinity is based on extensive archival sources, as well as the works of Foucault, feminist theory and psychoanalytic film analysis. The Tyranny of Elegance received very positive reviews.  The first chapter has just been reprinted in a new Routledge anthology covering the most important scholarship on fashion culture.

My second work, an edited anthology, The Rise of Fashion (Minnesota UP, 2004), grew out of the first.  I wanted to make the German, French, Italian sources I used for my research available to American undergraduates.  In addition to individual commentaries on the historical entries, The Rise of Fashion includes a comprehensive introduction that shows how fashion came to represent a gendered image of modernity in constant flux, evoking desire and generating economic demand.

My next book, On the Ruins of Babel: Architectural Metaphor in German Thought (Cornell UP, 2011) was conceived as a Habilitionsschrift—a second dissertation in the German academic tradition, written on a substantial topic unrelated to the first book. On the Ruins of Babel is the product of ten years training and research into architectural theory and history, which included a Humboldt fellowship to work at Berlin’s Technical University with the theorist Fritz Neumeyer, and other faculty members of the TU’s architecture department.  The book provides a detailed history of architectural discourse in Germany during the Enlightenment in order to set the background for close interpretations of Kant and Goethe’s major writings on architecture.  The later chapters engage the architectural aesthetics of Hegel and Benjamin as they respond to the epistemological and aesthetic models Kant and Goethe proposed. On the Ruins of Babel argues that German theory derives crucial categories from Renaissance and medieval architecture, which are then elaborated into modern accounts of subjectivity.

Since my days as an undergraduate, I wanted grow up to become a Goethezeit scholar--to read and write about German culture between 1750-1832 (roughly).  To that end, I am active in the Goethe Society of North America.  For five years, I worked as the editor for the Goethe Yearbook, the most important American journal for eighteenth-century German Studies, then three years as the vice president, and again three more as the president. The Goethe Society's national conference was held at Penn State in November 2017.
​
While researching Chinese-European history, I organized a conference, which appeared at the University of Toronto Press as an anthology, China in the German Enlightenment, edited together with Bettina Brandt. These essays trace the evolution of China as an imaginary place constructed by the readerly responses to travelogues.  How eighteenth-century writers cite, quote, edit and revise first-hand travel literature about Asia for their own, particularly European, concerns guides this early German encounter with China.  The volume provides a multi-layered account of how Confucianism was at first incorporated into the European philosophy and material culture by Leibniz and Wolff only to be dismissed later by Kant and Hegel as mere practical applications of ethics.

My newest book, Chinese Sympathies: Media, Missionaries, and World Literature from Marco Polo to Goethe (Cornell UP, 2021) examines how Europeans first came to identify with Chinese figures to such an extent that they could readily discover similarities between themselves and East Asians. The establishment of seventeenth- and eighteenth-century information channels through trans-oceanic trade allowed missionary letters, theological treatises, imperial histories, tragic dramas, moral philosophies, literary translations and poetic cycles to portray correspondences between China and Europe.   ​